I am not sure where my love affair with London started. Perhaps it was on that long ago trip to see Neil Finn at the Palace theatre all those years ago. Perhaps it was something else. I don’t know or to be honest, overly care. I just know that I love London and for many different reasons. It is elusive, charming, magical – a living and breathing thing that draws you in and if you are not cautious, consumes you. It’s a place to be careful, but yet carefree at the same time and a place full of danger and risks. And on this occasion, Nick Cave too.

Out of all of my Forty for Forty thus far, this was by far the trip I was looking forward to most for various reasons. And frankly, despite all before, it was the gig I was looking forward to most and neither were to disappoint on so many levels. Wandering round the city the night before, there was a beautiful, surreal supernatural type of magic in the air. And on the day itself, I was consumed by everything around me.

Of course, Nick Cave features in my book, so the purpose of the day was split into two. My quest for a signature and of course, the gig itself. So, once again, I give you the standard warning – this is not a gig review, it is some of the experiences I had. Gig reviews can be found on Google and some people are really good at them. I sadly am not.

Nick Cave… Nick Cave and the Bad Seeds. The name just effortlessly inspires the mind. The music infects into deep dark places. “You’ll see him in your nightmares, you’ll see him in your dreams” is a lyric from Red Right Hand. And it’s all about lyrics with Nick Cave and me. His words drip from his songs and into my head. No subject is off limits, Love, Murder, Lust, Death, Depression – I connect with them all in some way and on some level. Cave is the master of darkness, a master wordsmith and very much a hero of mine.

Yet I have never seen him live before. I have seen live DVD’s, or caught him on the TV – but never had the chance to see him live. In many ways, I really should have tried harder to see him in the more local Manchester gig – but Nick Cave in London. A heady and danger filled mix if there ever was one.

The venue was steeped in history too, musical and personal. The Hammersmith Apollo as it is now known is a marvellous venue. The place that Ziggy Stardust played his last show.  (Then called London’s Hammersmith Odeon Theatre) 2 months before I was even born! The place where, in 2004, I spent nights with Neil and Tim Finn in the “Everyone is here” tour and then in 2010, I spent a magical 3 nights watching the mercurial Neil Finn and Crowded House waltz through their back catalogue.

That comprised of dashing trips from a family holiday in Kent to see the shows, 2  shows alone and 1 with my family – the last one led to front row seats for me and young Ollie and a back stage party that lives long in the memory too.  However, the venue is a fans nightmare when it comes to signature hunting. Security is tight and access to the stage door is blocked by huge electronic gates. Add in the, what appears, elusive nature of Nick Cave when it comes to signing stuff, then my book signing was to be my biggest challenge yet.

I arrived early. Too early, but I needed the distraction to aid and focus my tired head. The band were inside sound checking and light checking. I could not hear, but I could see the executive mini cabs as the security gates opened periodically. I pounced on the security men, but my plea fell on deaf ears. I pounced on catering staff – again, it proved fruitless. I bravely entered the venue and tried at the box office. Again, it was not to be.

The diehards were already gathering. 4pm for a 7pm opening, they stood huddled in the falling rain. It’s a sight I am not unfamiliar with. Had I not had a seat, I would have probably done the same. As it was, I left the venue and headed for food and coffee. By the time I arrived back, it was 645pm and the queue was 10 times the amount. As I followed a man with a beard and long hair, wearing a skimpy tight dress into the back of the queue  – this is London after all – the heavens began to open and I was feeling tired and frustrated.

Once inside, I figured I may have a opportunity to ask around to see if I could get my book signed. And as if by chance, a suited and booted and rather attractive man stood in front of me. I could see he had an access all areas pass, so with a bit of brave cheek I approached him. At first he was dismissive, but as I explained the nature of the book and what I was trying to do, he relented and whilst making no promises, gave me his name (Brian) his mobile number, took the book and disappeared.

From that point on, I could relax and enjoy the show. I found my seat where I was met by Jo. Now, I had to get my ticket for this sold out show via Twitter and Jo fortunately had a spare. Jo was a Twitter person, but we were both strangers in real life and it could have been awkward – but actually, it was the opposite and we sat and chatted for a good while before we were rudely interrupted by the support act.

Now, those familiar with my reports will know that support acts can be hit and miss. This one was sadly a miss – she had 2 out of 3 in her favour – brave with the crowd and a great voice – but her only instrument was a squeezebox and that killed everything. As Jo and I sat trying to block it out, we found ourselves applauding after her songs out of politeness – until we realised what we were doing and asked – why are we clapping this shit!?

Still, it was soon to be over and the stage was set for Nick Cave to make his entrance. The sold out crowd was mostly in – the standing stalls were heaving and I was partly jealous that I wasn’t down there, but partly glad as I was so tired. But around 9pm, the lights dropped, the Bad Seeds took the stage and they were swiftly followed by the man himself. Always impeccably dressed, he strode onto stage like a man on a mission.

From that moment, I was hooked and transported into another dimension of musical experience. Starting off slowly with the beautiful “We no who U R”, they moved effortlessly into “Jubilee Street”. I swear to god, it was like having a musical orgasm. As the tempo gathered, as Cave preached and danced, as the lights kicked in – it was one of the most incredible things I have witnessed this year at a gig. I feared that Cave had peaked too soon – but that was not the case… nowhere near the case.

Cave is a front man. No guitar in hand, but occasionally turns to the piano – so he has a style of singing. A stage presence that sees him get almost on top of the crowd. He stands like an evil evangelist preacher man would in front of his congregation and he connects  and commands with spellbinding power and witchcraft. Added in his enthusiastic dancing you have a pretty heady mix – and he held the audience in his sway with ease. It was a privilege to witness.

The songs rattled past – “Abattoir Blues”, “Tupelo”, “Stranger than Kindness”, “Mermaids” – time was just standing still as the impeccable Cave blasted them out and the Bad Seeds followed his lead. Like some demented conductor of his amazing orchestra. It was a joy to see.

Cave’s softer side was evident on the haunting “Love Letter” where he sang just him and the piano and then with minimal accompaniment on  “Far from me ” – before launching into the “Higgs Bonson Blues”, where even Miley Cyrus gets a name check!  And he asked the crowd “Can you feel my heartbeat” – yes Nick, we fucking could!  “The Mercy Seat” was all action and then a spellbinding version of the epic “Stagger Lee” was to follow, as shots were fired in the song, the lights flashed and the passion grew and grew, before he closed the first part with the intricate “Push the Sky away”.

All around us, the audience were with him at all parts of the show – one fella down in front had clearly had too much to drink and was up dancing in some strange trance like way for a couple of the songs before the encore – in which he was to feature more than he bargained for. A 5 song encore followed with “Jack the Ripper” and “Red Right Hand” the stand out tracks – And as the drunk man began to make enemies with his dancing antics, leading to things been thrown at him, Cave wrapped the whole thing up with a new song at the end of the show. “Give us a Kiss” sang Cave – I think I would have given him more than that at that point in time.

It was over far too soon. But my quest was not ended – I had to find the handsome man with my book and here in lay a slight issue. My phone battery was down to 8% and he was not responding to my texts. I frantically began to seek him out and nobody knew him. I was getting a sinking feeling – was this another instance of instant karma  – I seem to be having a lot of this lately. Had I lost my book ?  I waited for ages, to the point that there was no one left other than security men. Who then started to push me out of the building – but then I saw by chance a lady with an all access pass and asked her – wait here she said, I will help you.

After 15 mins of dodging security further, 2 younger girls appeared and asked if I was Brian’s friend with the book. At that point, it was explained that Brian was actually Nick Cave’s manager! My book was unsigned but safe – however they promised it would be signed and posted to me. What a magnificent ending to the night. However, I am now conscious that rather than a quick scribble and hand back, Nick Cave may actually take the time to read my words and that is quite disconcerting. 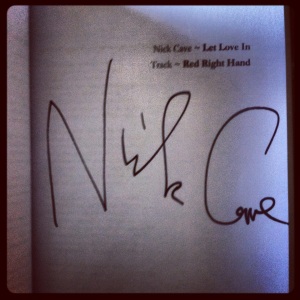 And with that, I was back into the magical London night air. I was high on the musical buzz, but so tired. By the time I was back to the hotel, my weekend was over and all I had were delicious memories burned into my soul. Forever. So, my Forty for Forty quest takes a break till the end of November, with a double trip back to London in a week – The Royal Variety show at the Palladium and then…. Neil Finn at St James Church in what promises to be…. Well, let’s not jinx it eh!  ?

So, thanks for sticking by this ramble if you have got to here – and yes, I know you have already had “Jubilee Street” recently on my blog, but you have now got it again and this time Live – As ever, I am thankful to fans at the front for capturing moments like this – I hope this transmits through, so please take a few minutes, crank up the volume and enjoy a flavour of the gig!